What a lovely clear Quay 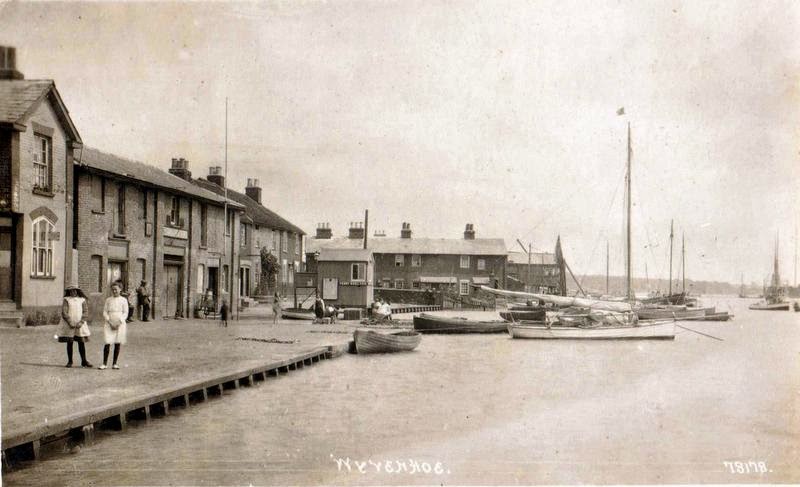 A photo. of Wivenhoe waterside around the 1900's. Yachtsmans Arms pub on the left of picture.

Posted by John Stewart at 12:29 PM No comments:

I am not sure which side of the street it was on. 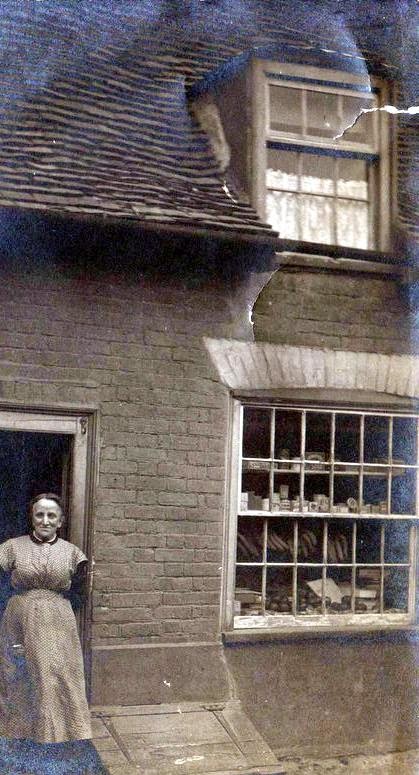 Mrs. Goodwin standing in the doorway of a shop in East Street Wivenhoe.

Mrs Goodwin was the Mother of Mrs Payne Wife of Mr. Payne of East St. who kept the dairy there.

My guess would be the north side because she appears to be standing in direct sunlight.
John Foster..

Labels: East Street
Can anybody Help


Looking for any of the Conway Family from the Wivenhoe,Essex, England.area, Pre 1761.


Many thanks John Stewart. Wivenhoe History group.
Posted by John Stewart at 12:17 AM No comments:

Another Family of boat builders on the River Colne 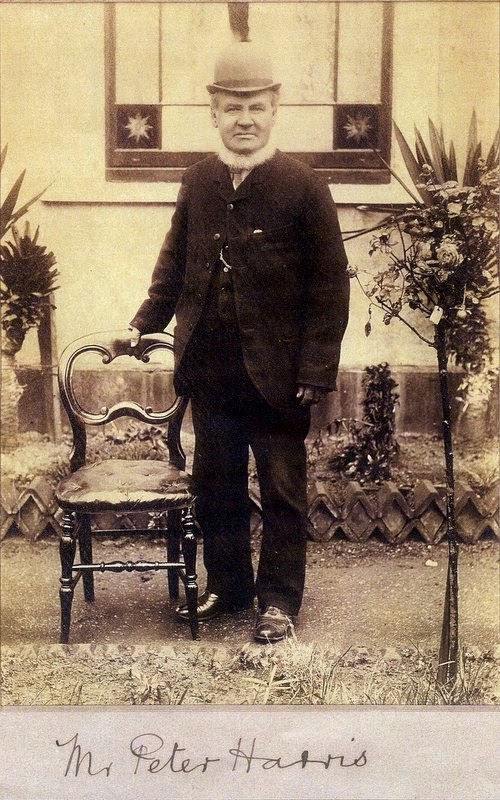 Posted by John Stewart at 8:38 AM No comments: 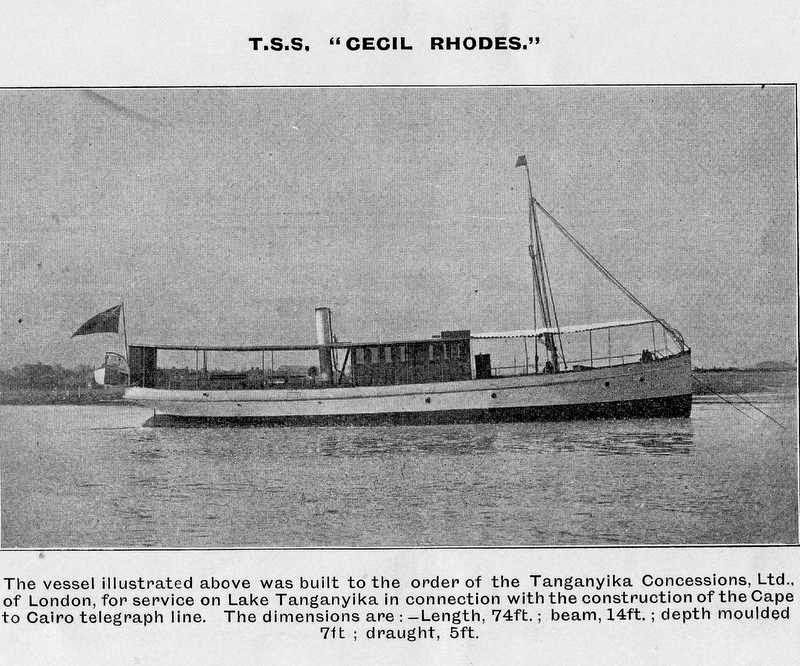 The African Queen which starred Katherin Hepburn and Humphrey Bogart sailing on a small steamer in Africa during WW1.
The story by C.S. Forester is loosely based on actual events which involved the twin screw steamer Cecil Rhodes pictured above , built by Forrestt &sons ltd At Wivenhoe..
The vessel now rests at the bottom of lake Tanganyika and is the only divable war wreck in Zambia.
The German ship involved in her sinking(named Louisa) in the film.was still afloat in 2008.

Originally the steamer was built for the Tanganyika Concessions Ltd of London to build the Cape to Cairo  Telegraph line.
After being built the ship was dismantled and the parts were shipped to Africa.  The sections were no more than 32kgs. as they had to be ported over the non navigable sections of the of the Zambesi and shire rivers.

Information the late Bill Ellis.
Picture by the Nottage Institute

Posted by John Stewart at 3:17 AM No comments:

They look a fine bunch of chaps. The old Massey Ferguson tractor ended up at Lefarge and used to pull out lorries when they got stuck.

Thanks to Antoinette Stinson Town Clerk for the photograph.
And the dog was Jubal. Thanks to       Anita Dufton

No tarmac in those days. 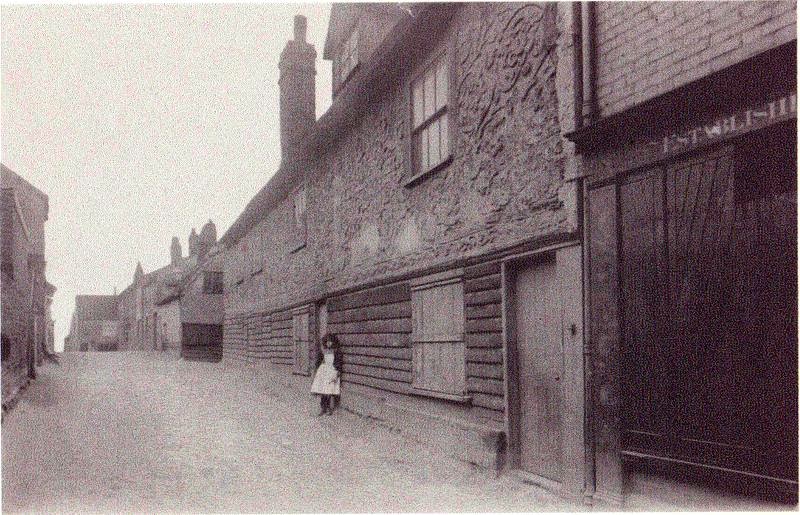 The old garrison House in East Street, built around 1675 this photo was probably taken around 1900.
At one time it was converted into 4 tenements.

Posted by John Stewart at 11:18 AM No comments: 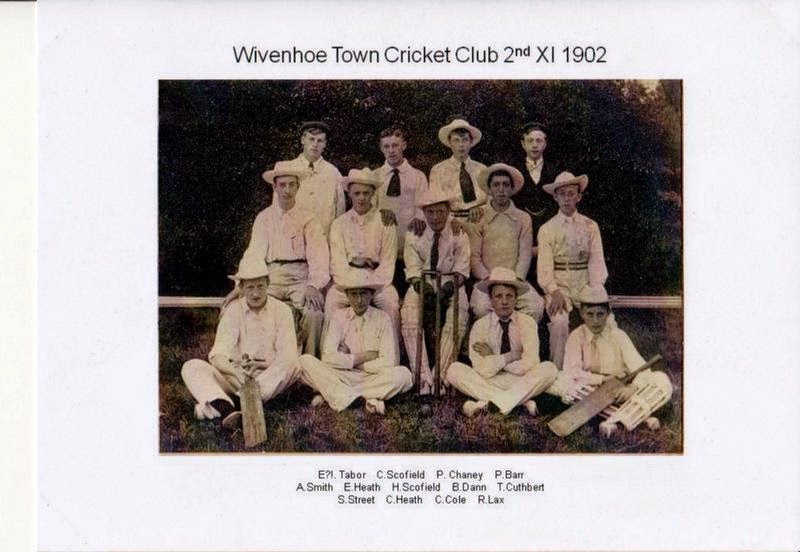 Posted by John Stewart at 5:24 AM No comments: 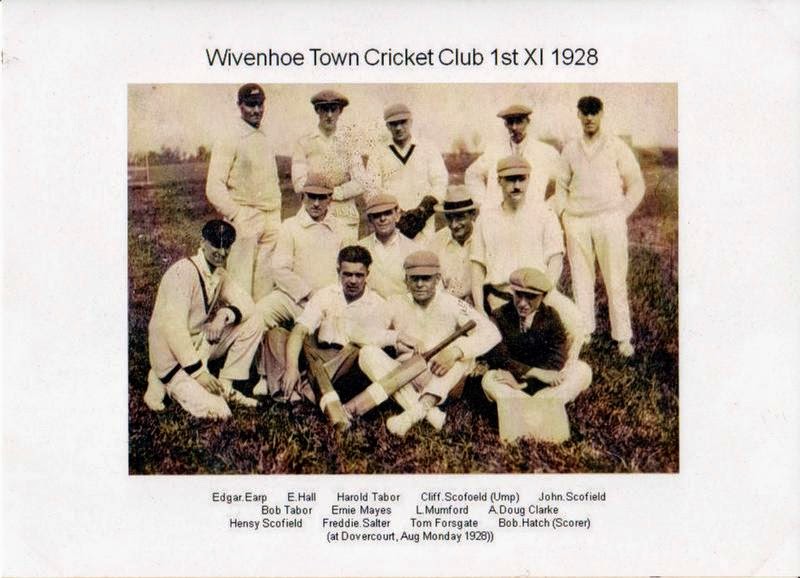 Posted by John Stewart at 5:20 AM No comments:

In 1944 Dorman and Long took over an area of marshland just upstream from the Wivenhoe shipyard.  there the company built a number of large and small floating steel caissons for use during the forthcoming invasion of Europe.
The caissons were intended, after being towed across the channel, to be bought into service to seal lock and dock entrances destroyed or damaged by demolition or other enemy action.
an area of about 3 acres was involved.  12 cranes of 30 ton lift together with railway lines concrete pads and roadways were built on the marshland to enable the units to be built on a production line basis.

Initially it was planed for 151 large and 151 small units to be constructed, however only about one third of the number were actually made.

The dimensions of individual units, which could be bolted together to form larger caissons were: height 30 feet width 7feet length 40 feet.
Posted by John Stewart at 1:28 PM No comments:

Labels: Wivenhoe Shipyard
To see more recent posts click on older posts at the bottom of the page.
To view super size images ,left click on any picture.
Posted by John Stewart at 1:14 PM No comments: 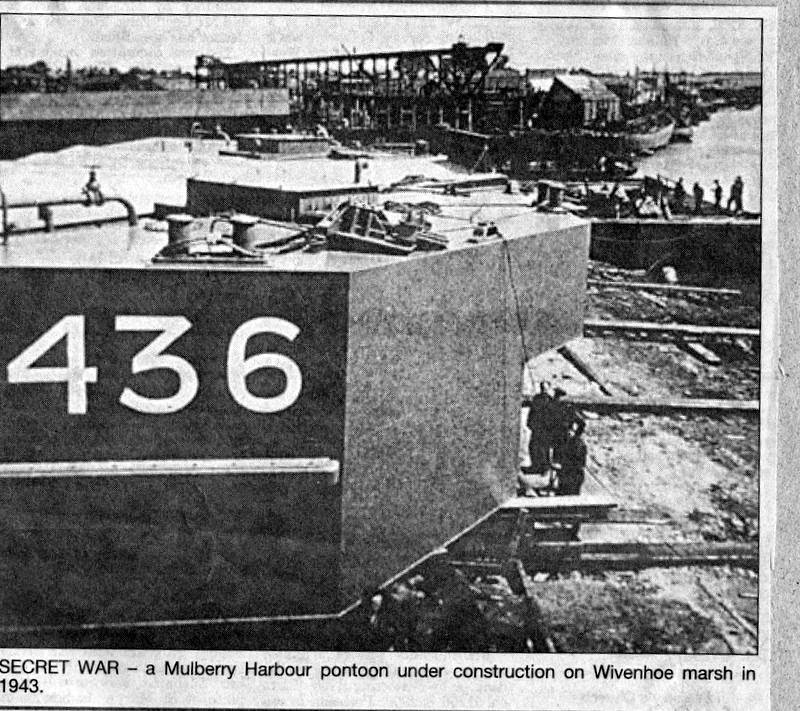 Part of the mulberry harbour built by Wivenhoe shipyard   The order arrived from the war office to build two Whale spud Pier head units of welded construction infilled with concrete, they were 200 feet long by 60feet wide.
I think this picture shows caissons being built on marshland next to the Shipyard by Dorman and Long, it was part of project Shark.
Initially over 300 of these units were ordered but only one third were completed.

Posted by John Stewart at 1:09 PM No comments:

When we had a High St. bank. 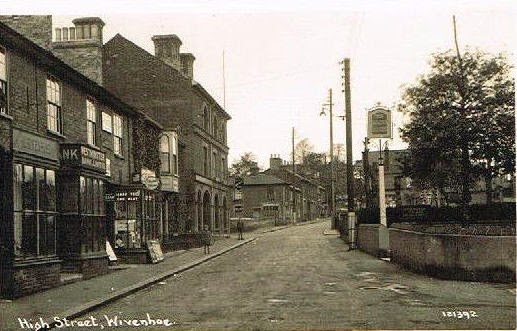 Wivenhoe High Street around 1935.  Next to the newsagents is the bank.  Originally it was Parr's bank later taken over by the Nat. West.

Posted by John Stewart at 12:38 PM No comments:

They all look so serious , for a wedding. 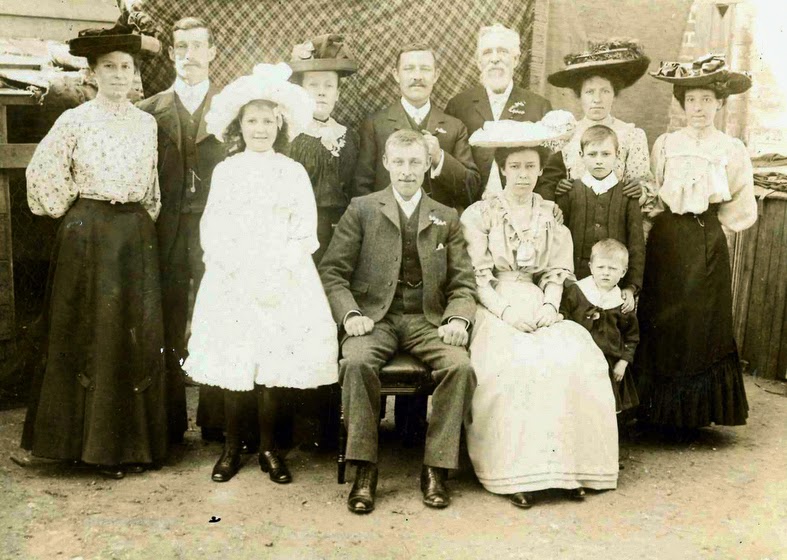 This is the wedding photo.of Harry Clifford Scofield and Sarah Rosina Cook, both seated at the front, both are from old Wivenhoe Families.
Also in the photo. is Sarah's Sister Ethel Hillyard (nee Cook) on the far left and standing beside her is William Hillyard. The date is 1906.

Does anyone know who the other people are?

Hello John, I was most interested to be sent a link to your blog by Nick Sheen in Australia. I haven't done much research on my Wivenhoe side for a while and so hadn't seen it before.

My great grandmother was Ruth Mary Cook, born in 1871, the youngest daughter of George and Eliza Jane Cook of Denton Terrace. Eliza Jane was George's second wife, his first being Rosina Pullen. I think most of the pictures you have from Nick are of the children from the first marriage.

It would be good to identify some of the other family members in the Wedding photo. One would assume that the man standing behind the bride with his hand on her shoulder, would be her father, George. However, I have a photo I was told was of him and Eliza Jane ( and does seem to be taken outside the Denton Terrace house),  and it is not the same man.

Ruth married Henry Richard Brown ( Dick ) born in Newington, London and my grand mother, Gladys was born in 1902  in Denton Terrace, although the family lived in Clapham, she went home to have her baby.
When my mother was a baby my grand mother contracted Polio and spent three years in hospital. For that time my mother was sent to live with Georgina Terry, the daughter of her aunt, Hephizibah Cook/ Hall. I understand that at some point during the 1940s and 1950s Stephen Hall ran a sweet shop in West Street. 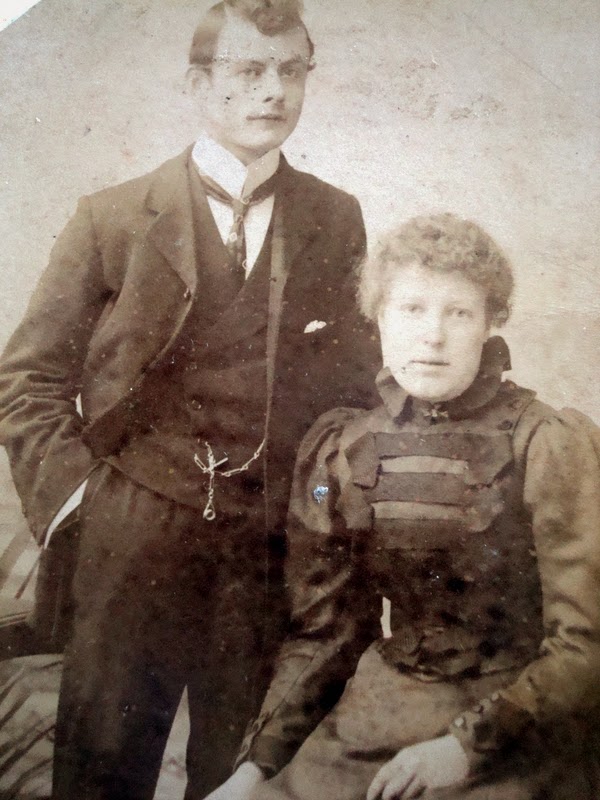 My mother was also sent to Wivenhoe during the war and we continued to visit my great grandparents, who moved to Rectory Road  in the 1950s until my great grand father moved in with us around 1960.

I would be interested to see if anyone recognises the people in the photos. Please use them if you would like to.

All the best,  Mary Player.
Thanks Mary for all the information .I am sure someone will pick this one up

Thanks to Nick Sheen (Western Australia). for the start of this thread.


Further to my comment about George being Rosina's father, he would actually have been her grandfather. Although they would both have been alive at the time of the marriage. Mary P.

The younger couple are my great grandparents, Dick and Ruth Brown. As far as I know the older couple are her parents ,George and Eliza Jane Cook outside their house in Denton Terrace. Mary P.


I should have said Sarah Rosina above. Mary P. 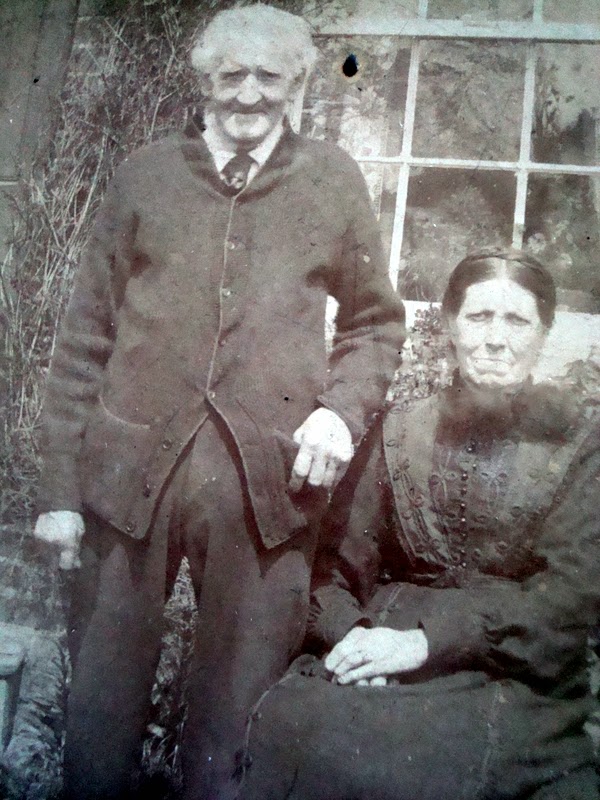 Anybody out there in New Zealand. 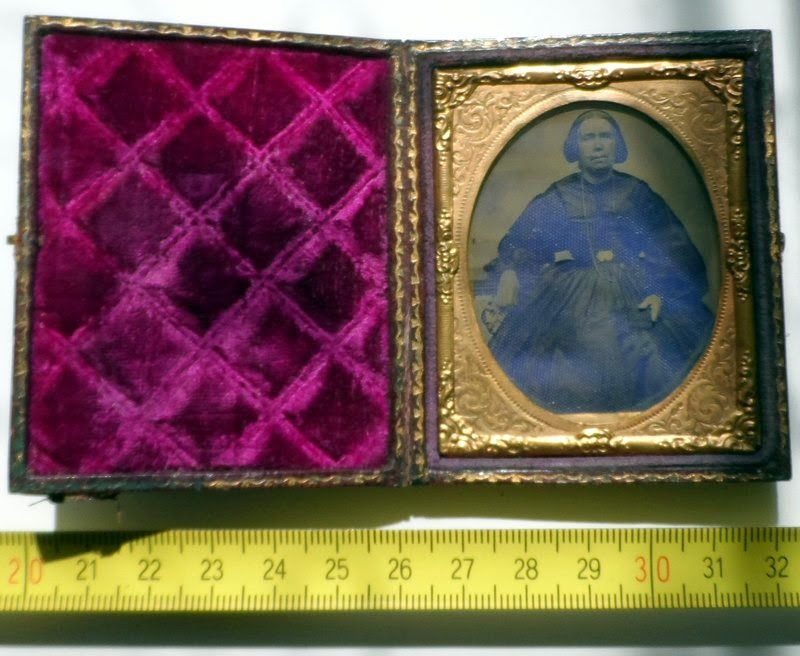 Does anybody have any information on Mabel Worsp.  Her parents were Henry Worsp and Maggie or Margaret Worsp thought to be living in Parnell, Auckland ,New Zealand. Date could be around the 1890's.
A bit more. I think she was born in Parnell, Auckland, NZ, on 31 May 1868. She was married to Harry Hughlings Jackson on 22 or 23 September 1891 at St Mary's (or Bishop's Chapel), Parnell. Here's an account of the wedding: http://paperspast.natlib.govt.nz/cgi-bin/paperspast?a=d&d=MH18910926.2.9.
Here's her husband - and a reference to her being the daughter of Captain Worsp of Auckland. http://nzetc.victoria.ac.nz/tm/scholarly/tei-Cyc01Cycl-t1-body-d4-d18-d15.html#name-414017-

Many thanks to Chris Goddard and Mary Norris for additional information.

Did they all survive WW1. Labels: Football Teams
Posted by John Stewart at 11:31 AM No comments:

That's what i call a sing song 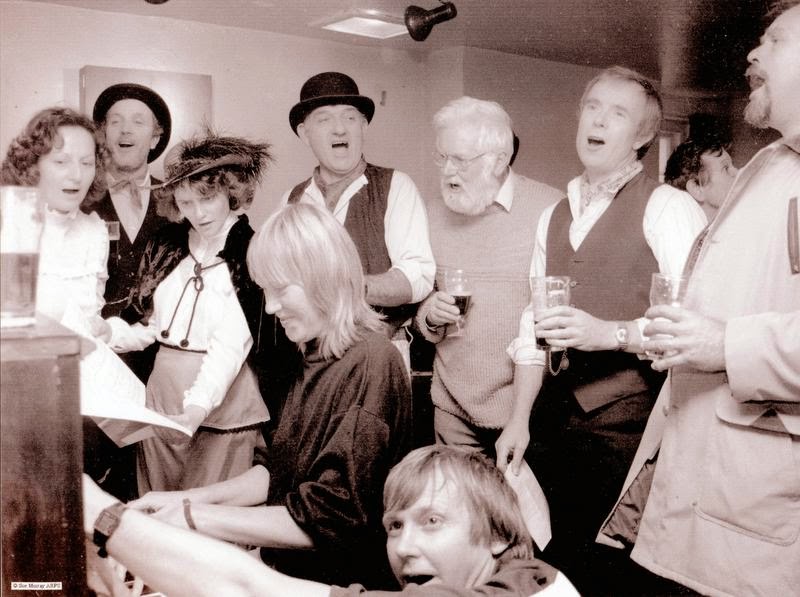 A sing song at the Rose and Crown pub at Wivenhoe taken in the early 1990's.

I think that is Celia playing the piano. Simon Bowes. 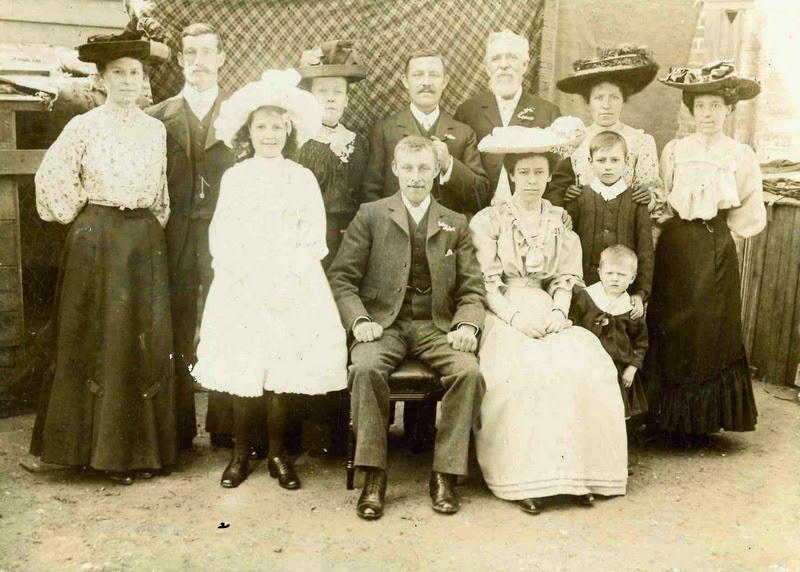 This is the wedding photo of Harry Clifford Scofield and his wife Sarah Rosina Cook, taken on their wedding day in 1906. they where both born in wivenhoe.#

Also in the photo are Sarah's Sister Ethel Hillyard (nee Cook) on the far left and standing beside her is William Hillyard, Nick Sheen's Grand parents.

Looking for any information of others on the photograph.

Posted by John Stewart at 11:03 AM No comments:

We are looking for names here? 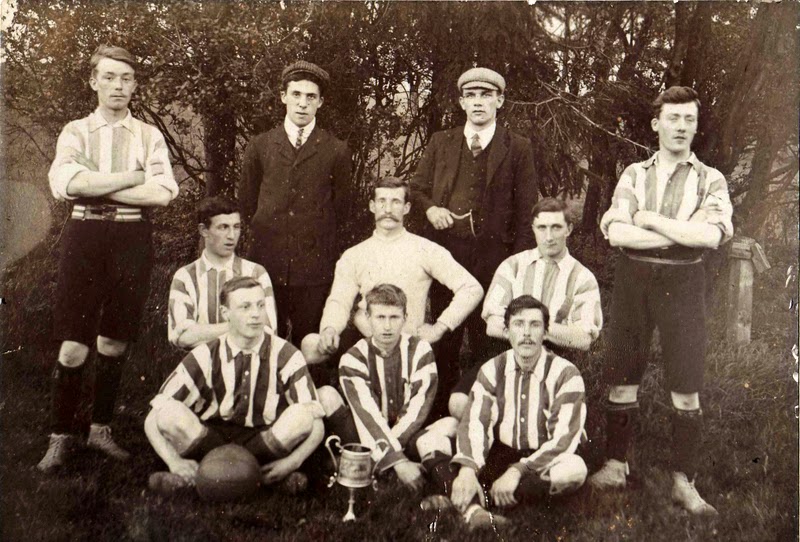 Wivenhoe Football team around 1900. the only known person in the photo is second row centre probably the goal keeper is William Hillyard who married Ethel Cook in 1904 at the Independant  Chapel in West Street.

Thanks to Nick Sheen (Western Australia) for the photo.

Wivenhoe Memories collection.
I believe this is Wivenhoe Crown football team (presumably the Rose & Crown pub team). I have seen photo of the Wivenhoe Crown team from 1904 wearing an identical strip - Nick.
Wivenhoe Crown's strip was yellow and green stripes and they played their matches on Mill Field. Hector Barr was the team captain for several seasons around this time - I don't know if he is in the photo - Nick